Oxford Archaeology East excavated the remains of Spitfire X4593, project managed by Stephen Macaulay, on behalf of the Wildlife Trust. The remains of the Spitfire have initially gone to the Pathfinder Museum at RAF Wyton for storage, conservation and preservation with the long term aim of presenting the remains in the Great Fen Visitor Centre. The excavation was completed in a week including the removal of the major finds such as the engine, propeller etc.

Stephen Macaulay said, before the dig: “We only expect to find the engine and armaments, which we hope will be reasonably well preserved in the fen soil, as well as fragments from the fuselage etc. Although we don’t know exactly what to expect we think that because the plane crashed into peat that the engine and other parts of the plane are likely to be quite well-preserved and this has been confirmed by the geophysical survey which revealed the engine at a depth of about two to three metres. The excavation also coincides with the 75th anniversary of the Battle of Britain and is just before the 75th anniversary of the crash.”

The archaeologists were joined by personnel of The Defence Archaeology Group who oversee OPERATION NIGHTINGALE, a ground-breaking military initiative using aspects of field archaeology and heritage skills to aid recovery and skill development of service personal and veterans injured on military service. The archaeological dig was used as a test case for updating of advice on the recovery of crashed aircraft (Historic England, Richard Osgood MoD and Peter Masters, Forensic Institute Cranfield University) and to test whether a more archaeological approach to their recovery, should this be possible, practical and safe.

Material from the excavation was taken from the site for sorting and cleaning: the major airframe components were removed mechanically. All artefacts remain the property of the Ministry of Defence, they will be inspected and then MoD will release them to the land-owner, the Wildlife Trust. 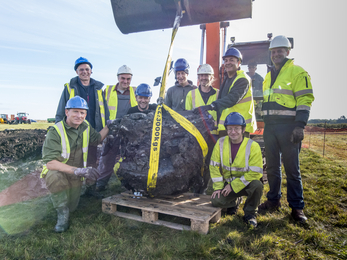 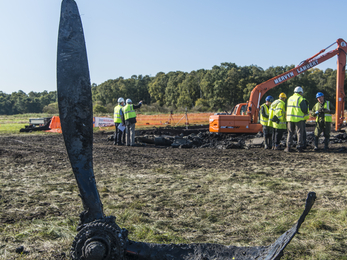 Geophysics was used to pinpoint where the plane crashed: in August 2015 Peter Masters, Research Fellow at Cranfield University Forensic Institute undertook the geophysical survey of the field where the Spitfire reportedly crashed.

The geophysical survey pinpointed the location of the aircraft and has revealed what is hoped will be a well-preserved engine around two to three metres below the surface. This will ensure that the excavation is conducted in the correct area.

Two techniques were used – a magnetometer – a device with two vertical white poles (sensors) connected by a horizontal pole, looking like a small rugby goal post. The horizontal bar includes a small box which collects and stores the data. The machine (so sensitive that operators must wear clothing without metal zips, buttons etc) is used with a harness around the body to support it, holding the machine in front of the wearer while they walk up and down the designated area taking readings.

The designated area was mapped out into 20m grid squares; within this the operator walks the lines of the grid 1m apart to cover the whole area; readings measure small magnetic changes in the soil, detecting up to 3m below the ground, identifying subsoil which differs from top soil because of its magnetic content, in areas where the ground has been disturbed.

A Ground Penetrating Radar was also used to give additional information: an electromagnetic energy signal is pulsed into the ground up to 40m deep. The penetrating waves transmit and receive at a rapid pace through the sub-surface; the unit measures the strength of the returning signal. The pulses are sent and received in real time creating a ‘slice’ of information that can be seen on a monitor simultaneously. When the data is collected and processed on the computer a 3D image can be created of the surveyed area. 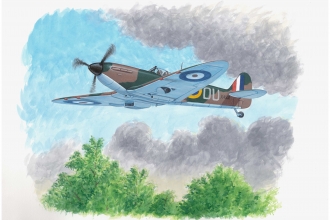 Discover the story of the Spitfire excavation in 2015. 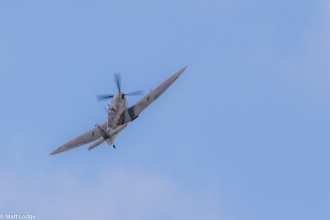 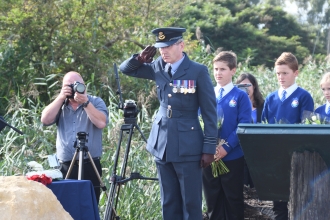 The local community, partners of the project and family came together to remember Harold Penketh.