Project Manager Kate Carver talks us through the exciting leaps forward for the crops, the science and the people of our peatland paludiculture trials.

We are thrilled to be able to continue our Water Works project into a third year and what a year it’s already been for us and peatland restoration in general. We are delighted to announce that the Wildlife Trust BCN has been awarded over £8m in a Heritage Horizon Award from the National Lottery Heritage Fund for a new project called Peatland Progress to expand paludiculture in the Great Fen and build greater connection with young people locally. And in May, the Government announced that sales of peat compost to amateur gardeners will finally be banned from 2024, and promised £50m to support the restoration of 35,000 hectares of peatland. As a result, my colleagues and I have been regularly speaking with local and national media to spread the word about the potential paludiculture holds for carbon storage and for farmers wanting to preserve the remaining peat soils.

Aside from the media, the hard work continues to progress and monitor the trial plots. The Water Works team is so pleased to get back on site and move into the next exciting stage of our project.

It has been an exceptionally wet winter followed by a dry April, and then a very wet May. Consequently, the paludi beds were wetter than desired but on the plus side the water storage pool filled up nicely ready for the dryer months ahead.

Although the site construction was largely completed last year, an outstanding element of work was adjustment of pipes between the paludi beds, which will regulate the flow of water from bed to bed. This has now been achieved, giving us full control over the water table, and the ability to achieve the “sweet spot” of the water table within 10cms of the ground surface; this profile ensures we can prevent carbon loss without methane release. 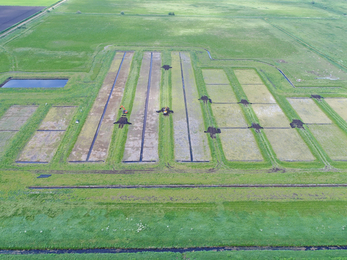 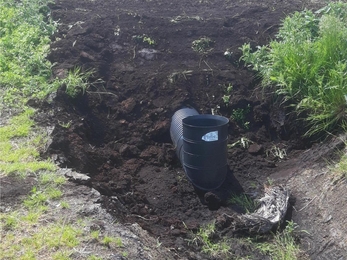 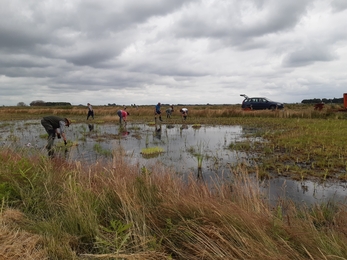 With the delays from lockdown, planting some of crops last year happened quite late in the season. As they were dying back the plugs were often mere stems so it did become an act of faith. We were concerned that some might not have survived inundation but encouragingly all is well. At a recent site inspection all the crops have come through the weather and the depredations of wildlife, even despite Chinese water deer treating our flag iris as their go-to salad bar!

As many of you may have noticed in your own gardens and allotments, it has been a late start to the growing season, but all the crops are now showing spring growth. Some minimal replanting is needed, but this is mostly due to wildlife pulling out the plugs and nibbling, rather than in failure of the crops to “take”.  More bulrush has been delivered as well, and is being planted to increase density, with a view to trialling harvests.

Our next major milestone will be the planting of 150,000 sphagnum moss propagules and the three beds for this have been prepared. This has included steam weeding and we extend our thanks to Cambs’ reserves staff for supporting us in getting this progressed. We are excited to be welcoming back our many supporters who helped plant our wet farming crops last year. In addition, we are looking into some extra crops, identifying a suitable variety of rice (which would be an annual) and possibly some more perennials.

An unexpected benefit of the wet weather has been to give our partners at the UK Centre for Ecology & Hydrology (UKCEH) a unique opportunity to measure atmospheric gas fluxes from the (uncropped) bare peat as the water levels have fluctuated throughout the spring.

The new monitoring equipment has been installed by University of East London’s (UEL) Jack Clough. This is using the IUCN UK Peatland programme’s Eyes on the Bog monitoring scheme, which UEL helped develop. The Eyes on the Bog method is designed to provide a low tech, yet scientifically robust and repeatable approach to long-term peatland monitoring. See Jack’s blog for the IUCN Peat Programme for more information. UEL is hosting the data on a newly created Peat Data Hub which is open access to peatland researchers from around the world. This is an exciting opportunity to feed into international climate science.

UEL are also supervising a new Water Works internship looking at the air purifying properties of sphagnum moss in architectural applications (e.g. green walls).  We look forward to reading Mr Dennis Sarpong’s report when it is completed and sharing the results with you.

As lockdown restrictions begin to relax we have been pleased to welcome back visitors to site. On Monday 17th May, we welcomed Robert Caudwell, Chair of the Lowland Agricultural Peat Task Force and Chairman of the Association of Drainage Authorities. Robert visited the site along with David Thomas, CEO of the Middle Level Commissioners, Brian Eversham CEO of WTBCN, Dr Ross Morrison UKCEH, Catherine Weightman of Natural England, Lorna and Kate. Robert endorsed paludiculture as part of the solution to reduction of carbon emissions from lowland peat and to loss of peat soils. We are proud to be feeding into Defra policy formation on lowland peat and paludiculture through representation on the Lowland Agricultural Peat Task Force Paludiculture sub group.

On 27th May, Deborah Land, Natural England Senior Advisor Peatlands & Restoration, joined Catherine Weightman, Jack Clough and me on site where we discussed some of the potential end products made from paludicultural crops. The bottle in the image is also an end product (honestly!) – it’s possibly the last surviving bottle of Sundew Ale, produced by the IUCN in 2016. Sundew Drosera is a carnivorous plant often found with sphagnum and has long been used for medicinal purposes – also meant to be an aphrodisiac! In the case of this bottle of beer, it was used as a flavouring.

We were also visited by two farmers interested in being “early adopters” exploring the possibilities of planting sphagnum on their peat soils to prevent the loss of carbon, protect peat soils, clean water and create new income streams, and the potential of using typha in food packaging to replace plastic.

Another interesting wet farming link has been formed with a start-up company called SaltyCo. SaltyCo are a young innovative company, developing new natural textiles from paludiculture plants. At this stage their preliminary target is for a "fill" for quilted jackets. They are a spin-out business from Imperial College, although they now have centres elsewhere including Scotland. Their marketing is very strong and they have buy-in from a number of fashion houses. This is exactly the sort of link up envisaged for the Water Works project, potential application of wet farming crops with innovative, forward thinking entrepreneurs.

I hope you all agree that Water Works is an incredibly important project. It is tackling fundamental issues that face farmers and growers, landowners and conservation organizations, communities and individuals, in the fens – climate change, loss of peat soils, water management and water quality, impacts on the natural environment, lives and livelihoods.

By sharing knowledge and working together with all of these different stakeholders, we can contribute evidence towards policy formation and take positive action on a local scale to fight climate change. All such interventions offer real hope for the future.

And finally, if you’re not already familiar with it, please look into the other element of our Water Works project, attaining the status of a UNESCO Biosphere for the Cambridgeshire Fens, as it’s through this that we seek to create a platform for everyone in the fens to work together for a sustainable future.

In 2019 the Wildlife Trust for Beds, Cambs and Northants, working with project partners, was awarded £1m by the People’s Postcode Lottery Dream Fund for its Water Works project.

The Summer Cut at Woodwalton Fen

This time of year is perhaps the busiest time of year at Woodwalton Fen. Natural England Reserve Warden, Tristan Colaco, explains the…

It's been over a year since we started our study of stonechats and, as this weekend marks World Bird Migration Day, it seems…

Tristan Colaco, Natural England Reserve Warden, highlights the special wildlife thriving on our nature reserves as a result of habitat…